Foot Massage is NOT Reflexology 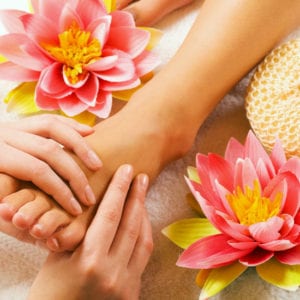 Foot Massage is NOT Reflexology

(Reprinted by permission from the American Reflexology Certification Board, Reflexology Digest, January 2017)

It’s frustrating to spend good money for something and be handed something else instead. In the U.S., that is too often what happens to people who request a reflexology session from someone other than a certified reflexologist.

Consider this situation experienced by massage business educator and author, and Alliance for Massage Therapy Education President Cherie Sohnen-Moe earlier this year, when she and her sister headed out to celebrate Cherie’s birthday at a well-known spa: Cherie chose, as one of her services, a foot reflexology session, a service described in the spa menu—as it is described in many spa menus—as specialized pressure techniques applied to specific wellness-related reflex points on the feet to release blocked energy, relieve stress and boost circulation.

“Unfortunately, that was not what I received,” said Cherie. “I got a foot rub. Granted, it was a very nice, relaxing treatment, but it was not a reflexology session.

“I know what reflexology is,” she added. “I kept waiting for the therapist to actually do reflexology, but it never occurred. I asked the therapist a couple of questions and it became very clear that she wasn’t a trained reflexologist.”

Cherie added, “I did mention my displeasure on the survey form. I received a voice message from the manager that he wanted to discuss this with me. I called back the next day and was left on hold for more than six minutes. I [also] emailed him, but he never followed up.

“Needless to say, I will never return to that spa, and I’ve told all of my friends and family not to go there,” she said.


Five states—Kansas, Minnesota, Oklahoma, Vermont and Wyoming—do not have a massage law. Reflexology is also unregulated in those states.

Four states, plus Washington, D.C., require a massage therapy license in order to practice reflexology. The problem with this is very few massage schools afford more than a passing glance at reflexology training.

Typically, what happens is a massage instructor—not a qualified reflexology instructor—explains the general theories behind reflexology and points out the general location of reflexes on a large wall chart, with instructions to press on those points if the client has health issues with that organ or gland. That is analogous to asking a sports medicine practitioner to teach cranialsacral massage.

With no training in reflexology, yet armed with a license that allows them to practice the discipline, it is no surprise that most massage therapists in those states head out knowing nothing about reflexology, yet believe they are able to offer it; or practice with an inaccurate impression that it is simply the application of pressure, during a massage, on sensitive points in the feet.

The lack of congruency across the country has arisen, in part, because of the broad definition of massage within various state laws. In some fashion or another, most states define massage as the manipulation of the soft tissue—muscles, fascia, tendons and ligaments—of the human body. Because any hands-on application to the body will result in manipulating, or feeling or moving a body part, it is easy to see why reflexology has been lumped in with massage—particularly if the people lobbying for massage licensing have no formal understanding of reflexology.

According to massage educator Rick Rosen, in his white paper On Becoming a Profession: The Challenges and Choices that will Determine Our Future (April 2008; www.massagemag.com/onbecoming), the then-more-than-25 state massage laws passed since 1990 were almost all a result of government relations efforts conducted by individual state chapters of the American Massage Therapy Association (AMTA).

As Rosen explained, each of those AMTA chapters are allowed autonomy in their legislative efforts, and although acting on behalf of the entire field, AMTA members do not represent all of the massage therapists in any given state.

That small representation of massage therapists, armed with their own individual biases and preferences, and sometimes possessing little or no experience with the complex world of government lobbying, has been responsible for the all-inclusive licensing laws that included reflexology and other bodywork therapies under the large umbrella of massage.

Responsibility must also lie with the reflexology community, which has, up until this point, left its practitioners to define reflexology as they wish.

Reflexology Defined
This past summer, the three arms of reflexology in the U.S.: the American Reflexology Certification Board (ARCB: www.arcb.net), the nonprofit, independent testing agency; the Reflexology Association of America (RAA; www.reflexology-usa.org), the national membership organization; and the National Council for Reflexology Educators (NCRE: www.reflexedu.org), the voice and resource center for reflexology educators, agreed on one definition to describe the practice:

Reflexology is a protocol of manual techniques, such as thumb- and finger-walking, hook and backup and rotating-on-a-point, applied to specific reflex areas predominantly on the feet and hands. These techniques stimulate the complex neural pathways linking body systems, supporting the body’s efforts to function optimally.The effectiveness of reflexology is recognized worldwide by various national health institutions and the public at large as a distinct complementary practice within the holistic health field.
This definition serves to clarify the differences in technique between reflexology and massage, and clearly states how reflexology differs in its intent from massage therapy, a practice that manipulates soft tissue with the intent to relax muscles. This distinction is crucial for states pursuing reflexology licensure separate from massage.
Similarities & Differences
As noted in an article I wrote for MASSAGE Magazine’s futureLMT (www.futureLMT.com) publication in May 2012, “People seek out reflexology for different and the same reasons they seek out massage. Both improve circulation of the blood and lymph and enhance the recipient’s quality of life.

“Western massage techniques are designed to relax tension within the soft tissue, with the goal of restoring the health of the anatomy,” I wrote. “The intent may be to diminish pain, improve posture and/or structural function and/or produce physical, emotional and mental relaxation.

“Although the benefits of reflexology include relaxation of mind and musculature, the primary intent is to support the health of the body’s internal systems,” I wrote. “Reflexology typically focuses on reflexes corresponding to stressed organs and glands, not the connective tissue elements of the body part being worked.”

Reflexology uses unique manual techniques quite different from massage, and has a long history distinct from massage, as outlined in the books Reflexology: Art, Science and History and Eunice Ingham: A Biography, both written by reflexologist Christine Issel, who is also legislative consultant for RAA and ARCB. In addition, reflexology is recognized by the National Institutes of Health, and hundreds of studies worldwide have brought evidence to its effectiveness in improving the quality of life for people in times of challenging health situations.

Qualifications
Training in reflexology ranges from one-day introductions to full certification, depending on the individual’s level of interest and how he or she plans to incorporate reflexology into a practice.

Of course, a one-day introduction does not provide training sufficient to offer reflexology in a massage practice. It can, however, inform the participant of the basics of reflexology and help him or her decide whether or not to pursue more complete education.

The majority of certified reflexologists offer strictly reflexology to their clients; perhaps augmented with hydrotherapy and aromatherapy. They create reflexology-based practices that safely help people of all ages restore homeostasis, optimize physiological functions and address system imbalances and weaknesses.

Some massage therapists, such as Florida-based Shea de Oliviero, have discovered that beginning a massage session with reflexology helps relax muscle tension and calm the nervous system enough that the massage portion of the session is easier on their hands and far more effective.

“I love what I am learning,” de Oliviero said. “I absolutely love it. I have used the relaxation techniques and the musculoskeletal protocol on about 20 people since last week, and the results are inarguable.

“The majority of my clients are regulars, so I am very familiar with their tissue in various stages and during various parts of a massage,” she continued, “and when I worked their hands and feet first, wow, the rest of the tissue became butter, just as inviting and easy to work with as ever.”

Credentialing
The member association, RAA, representing state affiliates and individuals in the U.S., welcomes practitioners with all levels of training.

Professional-level members must provide proof of at least 300 hours of foot or hand reflexology education (the national standard), 160 of which must have been accrued in a live classroom setting with an instructor. Although membership renewal does not require continuing education, most members have gone on to study various advanced protocols involving the feet, hands, outer ears and face from nationally and internationally recognized educators.
Practitioners with less than the Professional level of education are welcomed as Associate Practitioners. Reflexology students, reflexology schools and supporters also enjoy Associate memberships, including discounted admission fees to RAA’s biennial conference.

The Public is Aware
Despite the trend of foot massage being passed off as reflexology, the public is becoming more aware of reflexology and the training qualifications of certified reflexologists. Although there aren’t statistics to support this statement, I have been hired numerous times by high-end spas to teach their massage staff how to give a true reflexology session. They have told me this training is needed because reflexology is on the menu; their staff isn’t trained; and their informed clientele are complaining loudly that they are paying extra to receive reflexology and being given a glorified foot massage.

Also, when I teach two-day workshops, participants tell me they had a two-hour explanation of reflexology in their massage program but have been offering “reflexology” to clients who request it.

“Without separate reflexology laws setting educational standards with legal oversight, and because without proper training there is little or no expense involved, reflexology continues to grow as an add-on service in both the massage and beauty/nail salons and spas to increase income,” explained Issel.

Protect Scope of Practice
Spas and massage therapists will not be able to pass off foot massages for reflexology much longer, if they want to retain their credibility in the community.
Just as reflexologists don’t claim to be doing massage, massage therapists and spas should not claim to be offering reflexology when it’s really foot massage. It serves neither group to misrepresent their qualifications or mislead the public as to what various services are.

A foot massage is a lovely service, and so is reflexology—but they are not the same. Just as massage practitioners’ scope of practice should be—and must be, in most places by law—not infringed upon, trained reflexologists should be afforded the respect that comes from earning specialty certification.

The world needs more reflexologists. If you want to offer this specialty, contact one of the organizations mentioned in this article, or an experienced continuing education provider, and begin your journey into this rewarding and beneficial specialization.

Karen Ball, N.B.C.R., L.M.T., is President of the Reflexology Association of America and owner of the Academy of Ancient Reflexology (academyofancientreflexology.com), through which she presents introductory and advanced trainings in conventional reflexology, Thai reflexology and related subjects throughout the U.S. and Canada. She has practiced reflexology professionally since 1983.

Enter your email address and name below to become a Spirit of the Bear Insider and receive newsletters, tips, motivation, special offers, and other subscriber resources you can’t get anywhere else.

You’ll also be able to download a free copy of my e-book, “How to Lose Weight without Even Thinking about It!” When we focus on the entire picture of our health and well-being, we often experience many other serendipitous side effects such as losing weight without even trying.  I share with you in my book how that worked for me and how it can for you, too.

GIVE A REPLY Cancel reply